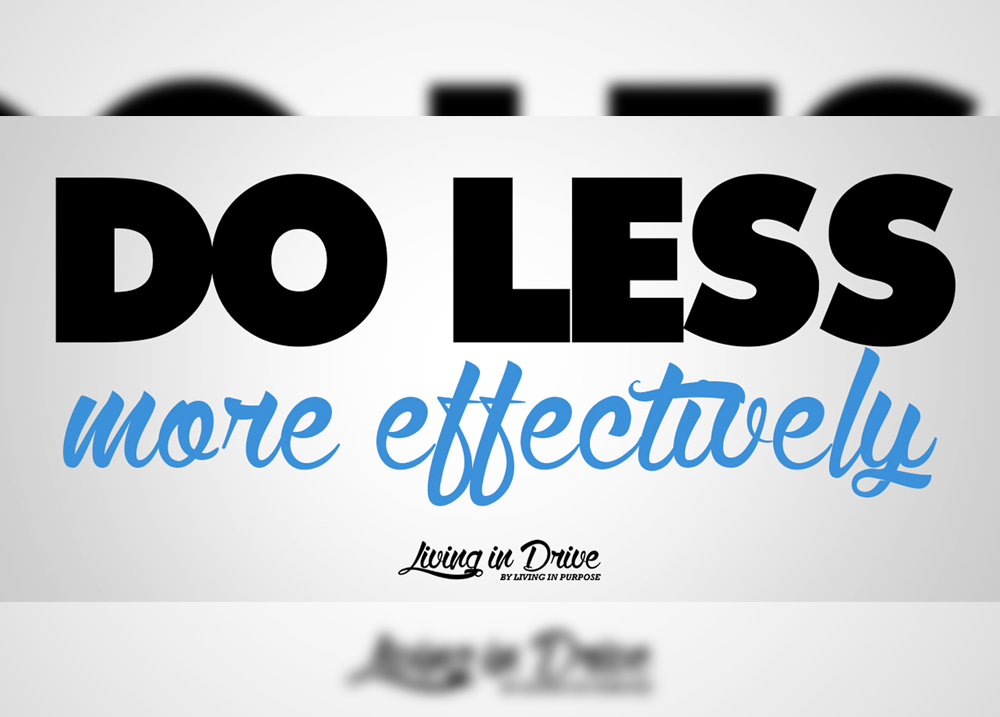 DON’T USE LESS IS MORE AS AN EXCUSE

You’ve heard the saying that “less is more”. Well that could be true but there are some requirements and prerequisites. First, let me say this, sometimes we take that saying and use it as an excuse why you’re not doing something or why you don’t want to do something. For me, it was exercise. I made up in my mind that instead of exercising 7 days a week, I would only get in 3 good days of workouts. Less is more right? Instead of stressing about trying to workout every day, I would only try to do 3 days. But, the problem with that logic was that I used that as an excuse why I didn’t want to workout every day; I wasn’t even doing LESS right. I didn’t even fully commit to doing the 3 days of workouts.

Less only is more only when it is done right – with efficiency and sufficiency. You can do something with the less is more in mind, but if you don’t do it right, it’s in vain. If it’s not done with sufficient effort and drive, you’re wasting your time. Everything that you do should be done to the best of your ability. Don’t slack off just because you’re doing less; you should actually give even more.

DO THE RIGHT THING

THERE ARE NO SHORTCUTS

I often see posts and hear people talk about becoming wealthy in a short amount of time, getting rich from working at home for 2 hours. I’ve seen people post screenshots saying they earned $12,352.12 in a matter of hours. I’m not saying they’re lying but what I am saying is that there’s no way that you can put in $50 work effort and get $12,000 results. It just doesn’t work that way. Now being gifted and talented at something is different. I’m gifted at graphic design. I can design a logo in 45 minutes and $250. But, you better believe I’m gonna put everything that I have into that logo design. It’s not strenuous work because I’m gifted at it; I’ve done it long enough that it doesn’t take long to do. My point in saying all of that is that you must put forth the work and effort to get the results you want. There are no get rich quick strategies– if there were I would know about them. There are no shortcuts to success– if there were I would’ve already taken them and told you about them. If you’re going to do less, make sure that you take more time and put in more effort to making it excellent.

LESS IS JUST AS IMPORTANT

Don’t be guilty of having the mindset that says: Just because I’m not doing as much I can give less effort. Just because I’m doing less, what I’m doing is less important. That’s wrong! Just because you’re doing less, doesn’t mean it’s not important. Sometimes the less is more important than the more. Just because you’re the janitor at the company doesn’t mean you have less value to the company than the CEO. Sure the CEO has greater responsibilities but if he doesn’t have someone to clean the bathrooms and empty his office garbage can, the bathrooms would be musty and his office would look like a pig pin. You are important!

In 2015 I will be releasing my 2nd published book. This book is nothing at all like my first.

Stuck In Neutral: How to Achieve Success by Living in Drive will be nothing like any other book you’ve ever read in your life. It’s wisdom, knowledge, insight and Biblically-based principles will change your life forever if you apply them to every area of your life. Its core message is that anyone, anywhere can achieve success and “live in drive” if they take personal responsibility for their life, put forth Level-10 effort and have undying determination and faith.

Everything that I have written in this book is what I have learned through my life’s struggles, trials, tribulations, successes and victories. If you take these principles of success and apply them to your life, I guarantee you that you will be successful and fulfill all your lifelong dreams. “Stuck In Neutral” is a self-help and personal development book. However, it’s not regurgitated, recycled self-help information you’ve heard from the majority of motivational speakers. These are principles of success that took me from college dropout to award winning graphic designer, national radio host, published author and serial entrepreneur.

This book differs in that this is self-help from a Biblical standpoint. In the book I’m not explicitly quoting scriptures in each paragraph, but I do make reference to several specific scriptures. This is my personal experience- these are the principles that have personally help me to become the man I am today. My prayer is that it will help other people find themselves and help them live the life God created them to live.

In this book you will learn how to:

Stuck In Neutral will be released January 2015. It will be available as a hard copy and as an e-book everywhere that books are sold. In the meantime, visit www.LivingInDrive.com.

At the end of the day when you lay your head down on your pillow, you are the only one who’s responsible for the outcome of your life. Strive to make adjustments, not excuses. LIVE LIFE IN DRIVE!!